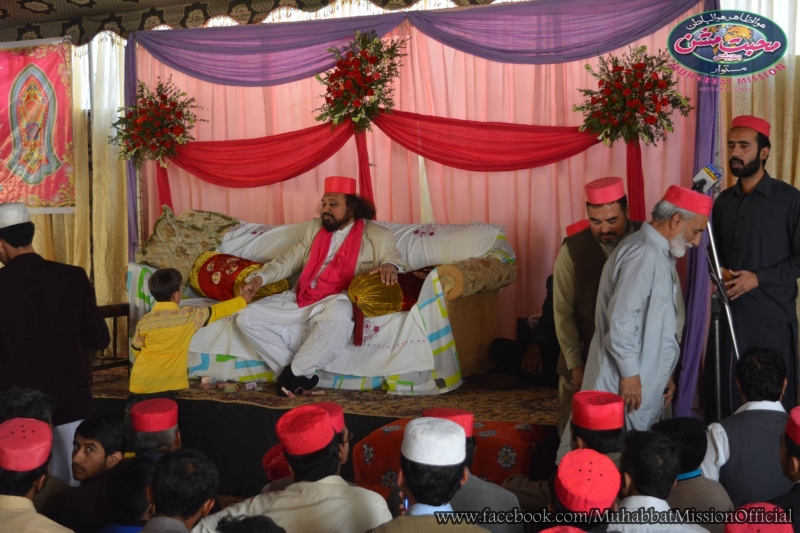 Qalander Peer Syed Mehmood-ul-Hassan Shah Khaki is also renwoned as ‘Mastwaar Qalandar’. It would be quite interesting to know that his family in Kashmir was also known as ‘Matto’ family. In Kashmir it means a family of those who are ‘Masst’, spiritually so much absorbed in Allah Almighty that they lost their own existence and became one with Him. Therefore, in Punjabi, used in the suburbs of Chakwal, ‘Mastwaar’ also means the same as ‘Matoo’. Like his father he is Hassani-Hussani’ Syed, the line of Hazrat Ali (R.A).

Hazrat Da’ood Shah Khaki was a great saint in his line, twelve generations back to him. He was ‘Qazi-ul-Qaza’, the Chief Justice of Kashmir, in his times. He was also called “Abu Haneefa Sani”, second Abu Haneefa, because of his sagacity and profoundity in Islamic-legal matters. By the spiritual inspirations of Hazrat Makkdoom Hamza Kashmiri, the 7th ‘Sultan ul Arfeen’, he resorted to ‘Tasawoof’, a spiritual practice to seek love of Allah Almighty. Under his spiritual supervission he observed a ‘Chilla’, a spiritual exercise to seek the love of Allah Almighty. He kept himself almost burried alive in a grave type of trench for four and half years. Thus, he become one with the dust. Hence, he received the tittle of Khaki, the one who has become one with the dust, by his spiritual guide and teacher Hazrat Makhdoom Humza. Since, then all the saints that succeeded him in his line were also called ‘Khaki’.